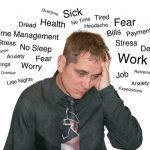 urvey by The Prince’s trust has revealed that political upheaval, job worries and low self-confidence have left young people anxious and daunted with 58% saying political events had made them fear for their futures.

Of the 2,215 people aged between 16 and 25 interviewed a total of 41% said they were more anxious than a year ago, the BBC reported, adding that young people’s self-confidence is at its lowest ebb in the eight years since the research began.

Prince’s Trust head Martina Milburn said it was ‘deeply concerning’ adding that the picture was ‘of a generation who feel their ability to shape their own future is slipping away from them’.

She told the BBC: “It’s shocking how many feel so desperate about their situation and it is vital that we support them to develop the confidence and coping skills they need to support in life. The single most important thing we can do to empower these young people is to help them into a job, an education course or on to a training programme.

“Now, more than ever, we must work together to provide the support and opportunities they need to unlock a brighter future.”

According to the research, carried out in November by YouGov for the Prince’s Trust Macquarie Youth Index, 50% felt it was harder to get a job than a year ago; 42% felt traditional goals like home ownership or a steady job were unrealistic; 34% felt they would have a worse standard of living than their parents and 28% felt out of control of their lives.

Too many of the young people polled are demoralised and pessimistic, says the charity, with 18% believing they would be unable to change their circumstances and 16% saying their lives would amount to nothing, no matter how hard they tried.

Another 12% said they did not know anyone who really cared about them while 45% were stressed about body image and 37% worried about coping at work or school.

Confidence levels were lowest among those who felt out of control, with almost two-thirds of this group blaming lack of self-confidence for holding them back.

Anxiety, stress, lack of self-confidence and self-esteem are becoming more prevalent among young people, agrees the National Council for Hypnotherapy adding that its 1,800 highly qualified therapists across the UK often deal with such issues, and that clinical hypnotherapy has a high success rate in treating these people.

“We live in a society where great demands and responsibilities are placed on us,” says the NCH. “And while some people manage, more and more people are showing signs of over-anxiety, which leads to stress, which can make a significant impact on the quality of life and well-being.”

The national body adds: “Anxiety can also manifest itself in different worries; it may be fear of being around other people, it may be anxiety in specific social situations, anxiety in your relationships with particular people at home, at school or at work.

“Anxiety is a fear or concern that is exaggerated, and is out of proportion to the situation, although sometimes it may not feel like this. The symptoms of anxiety correlate with the stress response or ‘fight-or-flight’. This is primal response that protects you against threats in your environment, so if danger is present your body triggers a rush of blood to your arms and legs so that you can fight or run away. To experience prolonged flight-or-flight creates feelings of anxiety.”

Let me be very clear about this, those people suffering from anxiety are not ill. There is no medical cure for anxiety, a visit to the doctor will normally result in advice to see advice to seek help from a counsellor or hypnotherapist or at worst be prescribed anti-depressants.

Clients who have experienced side effects of anxiety such as insomnia, find that they are sleeping much better and as a result are able to work more effectively.

If you are feeling unduly anxious or stressed about your life, why not us at HypnoHut Hypnotherapy 01634 301152 for an initial free consult. You have nothing to lose, and everything to gain.